The Luckiest Couple in McLaren

We bought another car this weekend. This time not so much from anxiety as from necessity, as our jobs no longer afford us the luxury of taking public transportation. The city is a big flat grid, and travel by car is most practical, if not essential. However, we are within walking distance of the Central Business District of Adelaide, so weekend entertainment will not jeopardize my precarious driving privilege.
Of course, the most natural thing to do with a new car is to take it on a long drive, and here in South Australia a natural drive in any direction will land you in the middle of wine country (save for any westerly direction, which will land you in the middle of the Gulf of St Vincent.)  We opted to take the scenic route, up into the South Hills and through the quaint German village of Hahndorf - where one can stock up on fudge, cuckoo clocks, strudel, and attitude. We hooked right in the town of Mt Barker, where Kevin works, and dropped into the luscious McLaren Vale Valley (is that redundant?) through golden vineyards and rolling green pastures studded with towering gum trees and shaggy brown cows - who, curiously, were all pointing in one direction, causing me to question whether they might possesses magnetic qualities. 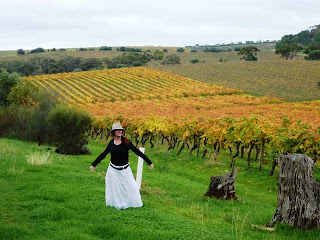 We stopped into the visitor center to collect maps and brochures. The kind lady behind the counter asked if had plans for lunch. We mentioned we were hoping to eat at the d’Arenberg Winery.

“Oh, they are booked out. We’ve had to turn away dozens of people already today.”

“The d’Arenberg Winery just called – they’ve had a cancellation – someone had car trouble – they can seat you immediately. Is a window seat ok with you?”

We did not hesitate.

“Well, aren’t you the luckiest couple in McClaren” oozed our hostess as she led us across the verandah (which, coincidentally was the name of the restaurant – imagine the odds!) to a table with a sweeping view of blustery vineyards and sun spotted hills. And the food wasn’t bad either, as evidenced by the number of people with cameras pointed at their plates, who moments later dissolved into puddles of fluttering eyelids accompanied by robust yummy noises – myself included. I can’t wait to burp and savor once more the delicate joys of ravioli stuffed with blue swimmer crab and lemongrass topped with fresh lobster and a brandy cream sauce. 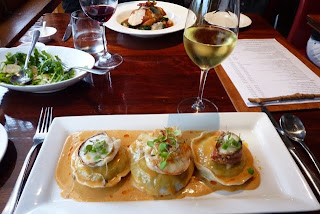 We took the direct route home, an engineering marvel in the face of limited funding. The Southern Expressway is fickle piece of roadway, swinging North or South depending on the current commuter demands. On weekday mornings it is a conduit into the city and reverts to southbound for the afternoon rush. On the weekends, the commute is reversed in order to efficiently whisk city-dwellers off to the vineyards and back again come dusk. Within 45 minutes, we were back home, reversing the new car into the garage… 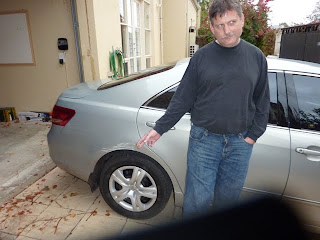 Oops, well, it’s not quite so new anymore! Obviously, we aren’t the luckiest couple in Adelaide…
Posted by Author! Author! at 12:26 AM 5 comments:

I spent most of last week working from my home office - a rather grandiose term for a rescue-chair, a pillow, and a shabby old table from the Salvos. By Friday morning I was practically immobilized with a painful assortment of ergonomic injuries (Thank you to Millie for the Kitty-Cat wrist pad, which came in quite handy towards the end of the week!). By Saturday, the procurement of proper office furniture became a high priority – and while we were out, we figured we’d pick up another car, too. 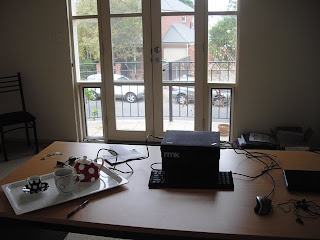 Now I have a nice big desk and a fully adjustable chair, and I can spend endless hours fiddling with various levers - tilting, sinking,  and leaning all accompanied by the satisfying sounds ‘pffft’ and ‘sssst’.  As attached as I am to the spartan yet cheery image of my polka-dot tea-pot on my vast expanse of desk, I have no doubt that the surface will soon be covered with note books, receipts, product brochures, and cat hair.

And speaking of cluttered surfaces…while I will bring home the occasional branded mouse pad or poster detailing fluorescently labeled cell-signaling antibodies, Kevin brings me twice weekly bag-loads of sumptuous shower supplies, heavenly hand creams, luxurious lotions, exfoliative elixirs, and luscious lipsticks which dominate my bathroom counter and might give an outsider the impression that I am one high-maintenance bitch! 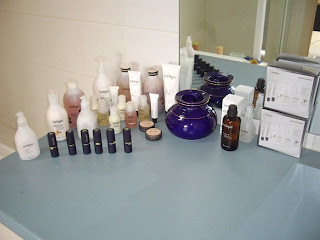 Last week,(at four in the morning in a frequent fit of stress-induced sleeplessness) I lit a candle, poured myself a wine-glass of cranberry juice, drew a steamy bath and set out to see how many products I could possibly use in one sitting. My normal skin care regimen consists of four products – which I have always considered excessive. However, this time I managed to utilize no less than 13 different organically grown, bio-dynamically cultured, and naturally prepared products! With an approximate street value of 687 Australian Dollars (51,407 Japanese Yen), I felt obligated to be thankful for the ensuing attack of hay-fever that followed my over-indulgent herbal ablutions – but I smelt DAMN good for the next three days… and my skin was absolutely radiant too!! 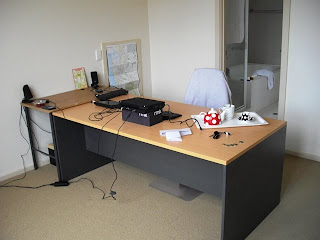 Soon, I will get out into the field and away from the nocturnal temptations of my executive-bath en-suite...and next week, Kevin gets his new car, so I will get to take possesion of the Hyundai! (...for some reason, I always feel the need to say 'Hyundai!' with an exclamation poin.)...and then we will have the capacity to chaffeur no-less than 8 people around the Barossa - so book your reservations at Spa McKinzie today...and speaking of today, our resident chef, er cook, has prepared an aromatic assortment of pickled red onions and spicy roasted carnitas...wish you were here!
Hyundai!
Posted by Author! Author! at 3:33 AM No comments:

After my first day of training on my new job, I dreamed that Kevin and I had been captured by a guerilla drug cartel in the jungle. The leader was a tattooed bad-ass who made us sit and watch while he gave his drugged out girlfriend carnal pleasure using a salmon...but not a whole salmon, mind you, just a nice fillet.
Posted by Author! Author! at 4:56 PM 7 comments:

The frenzy of cleaning, packing, and all the love-filled goodbyes dissolved as soon as we boarded the plane. We flew across Australia with serene anticipation of our new life in Adelaide, painted on the canvas of our imaginations with soft charcoal lines and delicate watercolors. We settled into our cozy temporary apartment and enjoyed a pizza before drifting off to sleep.

Then morning broke, literally, and the harsh realities of landing in a new city flooded away all the pretty paint.

We went to pick up our car, only to be told it had not yet left Sydney.

“Then why exactly did you pick it up 8 days ago?”

“Aw, look, it had to go into the queue for the truck. It’ll be here in two days.”

We retrieved the cat from JetPets without too much drama. Then she promptly disappeared into the kitchen ceiling.

House hunting had all the expected frustrations: agents who don’t return phone calls, completely misleading photos, apartments that have been let yet not removed from the web. No units in any of the suburbs we liked, perfect places in the middle of hell. Through a combination of perseverance and compromise, we managed to find a suitable dwelling. A bit out of budget, but we will be most comfortable. KA-CHING.

Then I called our removalist company to arrange delivery of our household goods which had been sent to storage in Sydney until we had obtained a destination.

“Aw, look, I don’t have anything else going to Adelaide at the moment.”

“Well, when can we get our stuff?”

“I dunno. I don’t have anything else going to Adelaide at the moment.”

“Yeah, but when can we get our stuff?”

“I just told you, we don’t have anything else going to Adelaide at the moment. If you want, we can send a whole container, but it will cost you an extra $3,500.” KA-CHING!

I can’t be bothered to bore you with all the painfully dramatic details, but after a hundred phone calls and a thousand e-mails (and ten thousand more tears), we managed to arrange delivery of our stuff 15 days sooner than expected for less money than we had been originally quoted. CHING-KA!

Now we just have to keep our fingers crossed through the weekend that Carlos – some guy Kevin found on the internet – actually delivers our stuff!

I don’t understand why people always feel compelled to tell me how much they hate moving. It’s one of the best weight loss programs I know!

Author! Author!
Shingletown, CA, United States
Warning: I am prone to exaggeration and out right fabrication in the construction of an interesting narrative. Also, I have poor taste in clothes...